Right before the Georgia/South Carolina line on I-85 North, milemarker 177, there is a stately tree in the median (Google Maps). It is different than the others. It is older, larger, and set apart. When I was little, we would always pull over to the right side of the interstate, run across, and place a ribbon around the huge trunk of this tree. Usually it was purple, but sometimes it was gold. If there was already a ribbon around the trunk, placed by someone else, we would often tie another. I knew what this ritual signaled. We were getting close to Furman. These trips often occurred in the fall as I attended homecoming with my Mom, Nana, Papa, Aunt, and Uncle. On campus each year, I remember playing in the bright leaves and climbing up the spiral staircase in the belltower until the gate near the top stopped me.

Years later, I had to choose where to attend college. I did overnight visits, tours, and mulled over the advantages of each school I was considering. A few days before the May 1 deadline I decided on Furman. I didn’t go there because I was a legacy (although I love tradition) and I hadn’t fallen in love with the school on my campus tour like many of my friends. A combination of factors led me there, and the thought of attending another school never crossed my mind throughout my four years.

On my freshman hall there were many quality guys whom I became friends with quickly. We made the trek across campus to our sister hall countless times as they became our good friends. I joined KA, the fraternity of my Papa, and soon realized what bonds of true friendship could look like. I kept myself busy with clubs, studying, social functions, and relationships with friends. I remember often thinking back to high school and realizing that college was better than I ever envisioned.

I became part of a group of friends who truly cared for each other. We cooked for each other, roasted each other, spoke truth to each other, and displayed love in the midst of difficult times to each other. It is only now, a few months after graduation, that reality is setting in. This isn’t just another summer, and we won’t all see each other again at a Registration Night party. I often think of all the times spent with this group, the lessons we learned together, and the friendships that were forged. I am thankful. Effort is required to maintain friendships, and while this challenge awaits so does the reward of seeing how God will use each of us in the world. The majority of the crew is below:

As I drove home southbound after graduation I saw the stately tree in my mirror. I later asked my Nana how the ribbon tradition began, and she told me that they first tied ribbons around the tree during the 1970s as they took my mother to school. For her, the tree always stood as a reminder that they were getting close to Furman. After asking around at school, no one seemed to know about the tree. Perhaps after reading this others will join the tradition. Regardless, as I grow older and make the journey back to campus from a new home I will tie a ribbon around the tree with my family, point it out to others, and be reminded of the experiences and relationships that I had at Furman. Throughout my childhood I was always known as an entrepreneur.

I believe this side of me first came out after working the Rockdale County High School concession stand with my parents in elementary school. I quickly realized the profit margin on candy and from there I began to sell candy and snacks at Boy Scout Camp. Later, I began to sell glow necklaces on the Fourth of July to yuppie families at Hilton Head. Once I became aware of ebay I sold anything I could get my hands on, whether it was items I obtained from estate sales, my closet, or from friends (like this weird car).

In college I have held more traditional jobs, and as a culmination of my photography work for Furman University, I would like to debut a venture that I began with my friend and fellow photographer Nathan Guinn. Over the past few years we have taken thousands of photographs of Furman for various purposes and we both desired to make prints of our best artwork available to friends, alumni, and others throughout the world so we have created a website to put them up for sale. I believe you will find the prices to be very reasonable.

Furman holds a special place in my heart. I grew up hearing stories from my mother, aunt, uncle, and grandparents about how special this place was to them, and after visiting as a child and a prospective I was ecstatic once I chose to continue this legacy. As my time here approaches an end, I can see more clearly how I have been shaped by the relationships, academics, and experiences which have defined my four years here. Two of my friends, Todd and Sally, asked me to do a small set of engagement photos for them. Often, my first reaction to requests for portraits is to shy away, as I regularly feel this is one of my weakest areas. There is a great deal of pressure to get the right “shot” and I often take a ton of photos hoping a few will turn out without having to call someone back to reshoot them. However, sometimes stepping out of my comfort zone is well worth it.

I travelled with Todd and Sally throughout Europe and they are a couple whose relationship I have admired and seen grow over the years. A different angle of my favorite scene on campus looking from the library to the Chapel.
Chapel Sunrise It is hard to put into words the feelings I had when President George W. Bush’s motorcade pulled into Paladin Stadium. 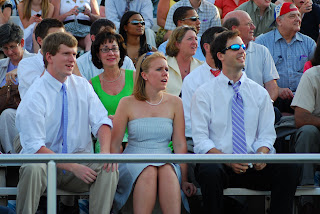 The stands erupted and as I turned around from the press box I saw the Furman community on their feet welcoming the President. Soon after, I heard the reports of the thousands of citizens who lined Poinsett Highway welcoming his motorcade. Suddenly the 50 people on campus who dissented seemed pretty insignificant. After all of the anticipation, excitement, stress, debate, and controversy I was more proud than ever to be a student at Furman University.

His speech was very well done and was filled with hilarity, humility, and insight for our futures.

Below are some of the shots I got.  You can view more of my work capturing this day here: Furman Magazine Article and Furman Photographers’ Gallery of Commencement 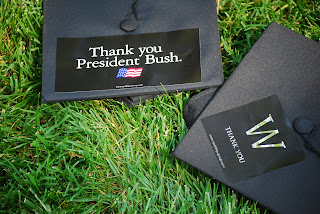 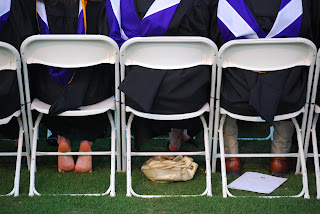 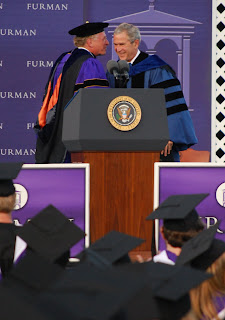